Have a pest problem and need a quote?

Have a general enquiry?

We will aim to get back to you as soon as possible.

We will aim to get back to you as soon as possible.

We are very excited to share that from 1 August 2022, Terminix UK Ltd will be operating under the new name Vergo Pest Management Ltd.

Our new brand recognises us as the UK’s largest independent pest management provider, which is underpinned by our main shareholder and investors from Norvestor.

This change of company name will allow us to present ourselves as the most innovative and forward-thinking pest management business in the UK today. As part of our new brand commitment, we will also be continuing to develop our sustainability and green credentials on behalf of our customers, staff and for future generations.

On 1 April we acquired Pest Pulse Ltd (UK only).

All services previously carried out by Pest Pulse are now being carried out Vergo Pest Management Ltd.

We are pleased to announce the acquisition of Expert Pest Control by Vergo Pest Management Ltd, which has officially completed on Friday 30 September 2022.

What are carpet beetles?

Carpet beetles are a type of small ladybird that is usually mottled brown, grey, and cream in colour.

They can be easily differentiated from the Fur Beetle as these beetles are black with one spot on each wing case. Carpet beetles are generally quite small in size with the adult measuring 2-4mm in length. Despite their size, they’ve quickly become one of the biggest pests faced by the British textile industry – even surpassing the Clothes Moth.

As with woodworm, it’s not the beetles themselves which cause the damage; rather it is the larval stage that causes all the mayhem. Around April, May, and as late as June, adult beetles can be found searching for sites to lay their eggs. Nest options range from old birds’ nests to felt, fabric, or accumulated fluff in buildings.

Varied carpet beetles are round and about the size of a ladybird (2 to 4mm long).

They are mottled black, white and gold. Each female will lay up to 100 eggs in spring and early summer on furs, wool and natural fibres. These eggs hatch into hairy, brown larvae, commonly known as woolly bears. The woolly bears avoid light and curl into a ball when approached. It is the larvae that cause damage to natural fibres, as they feed and grow.

A female beetle will usually lay around 20-100 eggs, and these usually take around 10-35 days to hatch depending on the temperature.

The larvae of a carpet beetle can grow to 4mm in length, moulting as it develops. They are usually covered in brown hairs and have a tendency to curl up in a ball when disturbed. They also have a tendency to shy away from the light, favouring the dark instead. In their larval form, carpet beetles feed on feathers, fur, hair, and wool and typically enter airing cupboards causing damage to clothing, blankets, and other textiles.

Larval carpet beetles are usually most active around October, hibernating during the winter before emerging and pupating during the early part of the following year. In their adult-form, carpet beetles feed on nectar and pollen and are drawn to the light. After a short time, the cycle repeats and the next batch of eggs are laid. The adults themselves live for anywhere from a week to over a month. 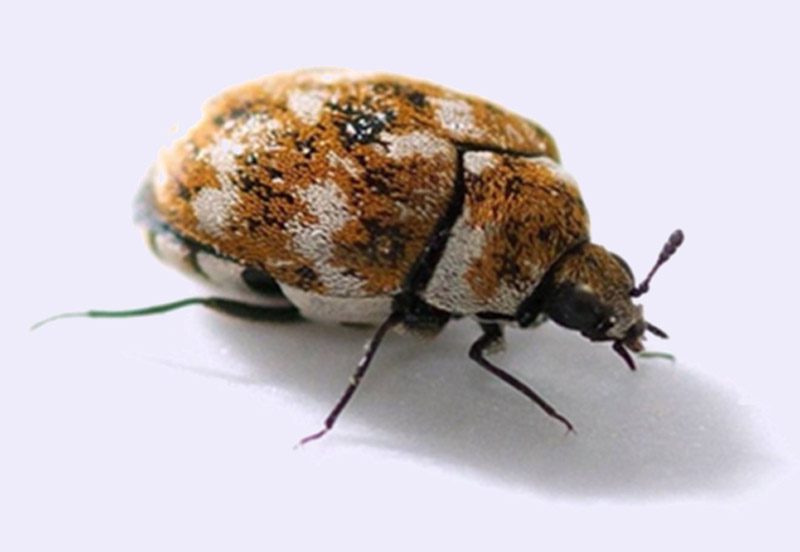 While carpet beetles don’t bite, they are in many ways far more destructive than insects such as bed bugs. Carpet beetles consume natural fibres making them a menace to the textile industry because of the sheer amount of damage they can cause. Beyond textile businesses, homes, hotels, restaurants, schools, hospitals; pretty much any property where textiles are present can also be susceptible to infestation.

The last thing you want is to be dealing with carpet beetles if you’ve just spent a fortune on a new three-piece suite. Fortunately, the impact can be mitigated by simply picking up the phone and calling Vergo pest control today.

Call Vergo pest control today, and we’ll arrange a convenient time to carry out a no-obligation survey of your property. We offer same-day appointments, so if yours is a matter of some urgency, simply let us know, and we’ll get to you as quickly as possible. Our team consists of fully trained, qualified, and accredited specialists who have plenty of experience in tackling carpet beetle infestations.

Our experts’ combined skills and knowledge has enabled them to effectively control and prevent carpet beetle infestations in properties spanning numerous locations.

If the location you live in is not listed above, give us a call now as we’re sure to have a specialist operating in your area. Much of our work comes from client referrals, and we’re considered one of the leading companies for the honest and impartial advice we provide. What’s more, is that we provide a wide range of treatment options ensuring a carpet beetle-free property for our clients.

The commercial impact of carpet beetles can be extensive and is not just limited to businesses either. Stock can be damaged by the presence of carpet beetle larvae, and if the larvae are then transferred to customers’ homes, the damage can spread. If an infestation occurs, the premises have to be shut down, inspected, cleaned, and any damage put right before normal operations can resume.

This can lead to a serious amount of downtime making our services all the more vital to minimising this and lost revenue. At Vergo Pest Management, we can assist commercial clients by providing preventative inspections and treatments. We can also monitor and control outbreaks through the use of natural pheromones. With our assistance, you’ll be safe in the knowledge that your business is protected against any future outbreaks.